A large financial institution was faced with a perplexing dilemma on how to cost effectively destroy a significant number of sensitive assets distributed throughout the U.S. without giving up custody.   They also required visual verification of the entire process happening in real time and detailed documentation that could be easily retrieved for up to 10 years.  The cataloged devices, which included desktops, laptops and servers, were also depreciating much faster than previous deployments.  To conserve precious vault space and recover value on the newer equipment the IT group began removing the data bearing devices and storing them separately.

“This strategy paid off” said David Gray a National Business Development Manager for ATR “we were contracted to catalog, test and repurposed the newer equipment which generated revenue and then destroy the remaining assets in an environmentally safe and sustainable process.  The customer was able to monitor the entire project in real time using our FIPS 140-2 (Federal Information Processing Standard) compliant web portal” said Gray.  “Each asset is checked in by serial number, tested for functionality and qualified assets are sent to our Asset Recovery Team for potential re-distribution” said Gray.

This practice solved the immediate problem but eventually it became necessary to devise a plan to destroy the accumulating hard drives simultaneously at operation hubs around the country and under the watchful eye of the IT group.  Liability was a primary concern but there were also a number of other factors including reconciling existing inventories, visual verification and documentation of each device being destroyed and of course how much would the project cost.

After considerable deliberations they determined the data bearing devices would need to be destroyed at their facilities to minimize risk despite the higher cost than utilizing secure ATR shredding facilities located throughout the U.S.    ATR entered into discussions shortly thereafter to help define a SOW and outline a methodology the customer would use to manage secure destruction of sensitive assets going forward.  It was decided the hard drives would be consolidated into 10 different company locations across the country from the original 25 sites where they had been previously stored.  The logistics teams at ATR provided a thorough approach to moving personnel and the remote shredding machines into place.  ATR also coordinated the redistribution of the devices being transported by authorized customer personnel so everything would arrive at the same time and provided secure transport for the recovered commodities once the process was completed.

“We did comprehensive surveys at each site to verify there was adequate work space, proper security and sufficient power to ensure the company’s daily operations would not be disrupted.” said Gray

Once the surveys were completed a date was set and the equipment and personnel were put into place.  At each location the ATR team arrived in the morning and began the process of shredding the hard drives into tiny unrecognizable pieces.  Prior to shredding each hard drive serial number was recorded using hand held computers with built in scanners.  This information was then stored on the hand held device and transmitted to the ATR database upon the completion of the work at each location.  Finally a manual list of each hard drive was agreed upon by the company representative at each site and the serial numbers were also downloaded to a thumb drive and given to the on-site company representative. 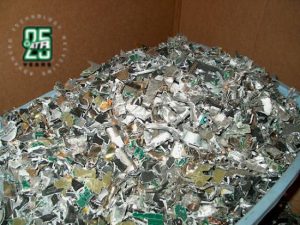 At the completion of this project over 6,000 drives were destroyed and the entire process was captured on the company’s video surveillance systems for added security.  The serial number of each drive was recorded and downloaded to the ATR Database affectionately known as “Betty” and detailed reports were provided to the onsite customer representative in real time.  To keep the project running smoothly ATR deployed a spare shredder kept on standby but ultimately it wasn’t needed and the project completed ahead of schedule.  As a result of the advance planning, in just 10 days the devices were all relocated, inventoried and destroyed with visual verification and comprehensive reporting.

Advanced Technology Recycling (ATR) was formed in 2002 to meet the growing need of Business-to-Business customers seeking transparent and reliable ITAM (Information Technology Asset Management) Recycling solutions.  The company’s original retail store was opened in 1992 by the parent company B & K Technology Solutions as a traditional Value Added Re-seller (VAR) and technology service provider. ATR’s senior management team has been providing ITAD (Information Technology Asset Disposition) sales and service since 1992.  Over the past 25 years ATR has grown into one of the world’s leading electronics recycling companies and they also hold a Guinness World record for recycling the most consumer electronics in 1 week across multiple facilities.  ATR specializes in ITAM/ITAD recycling and asset management solutions and they offer one of the industry’s most comprehensive service portfolios. Their website can be found at www.ATReCycle.com or visit their social media site at www.Facebook.com/ATReCycle to chat with one of their customer service representatives.

David Gray joined Advanced Technology Recycling in April of 2015. David brings over 17 years of experience in the IT recycling industry to ATR. David also has over 20 years of OEM sales experience in the IT industry for various worldwide electronics companies. This experience on both sides of the manufacturing process gives David a unique perspective on the IT recycling industry. Residing near Rome, GA David brings national sales experience to the ATR sales Team. A graduate of the University of Georgia, David is a lifelong DAWG fan.